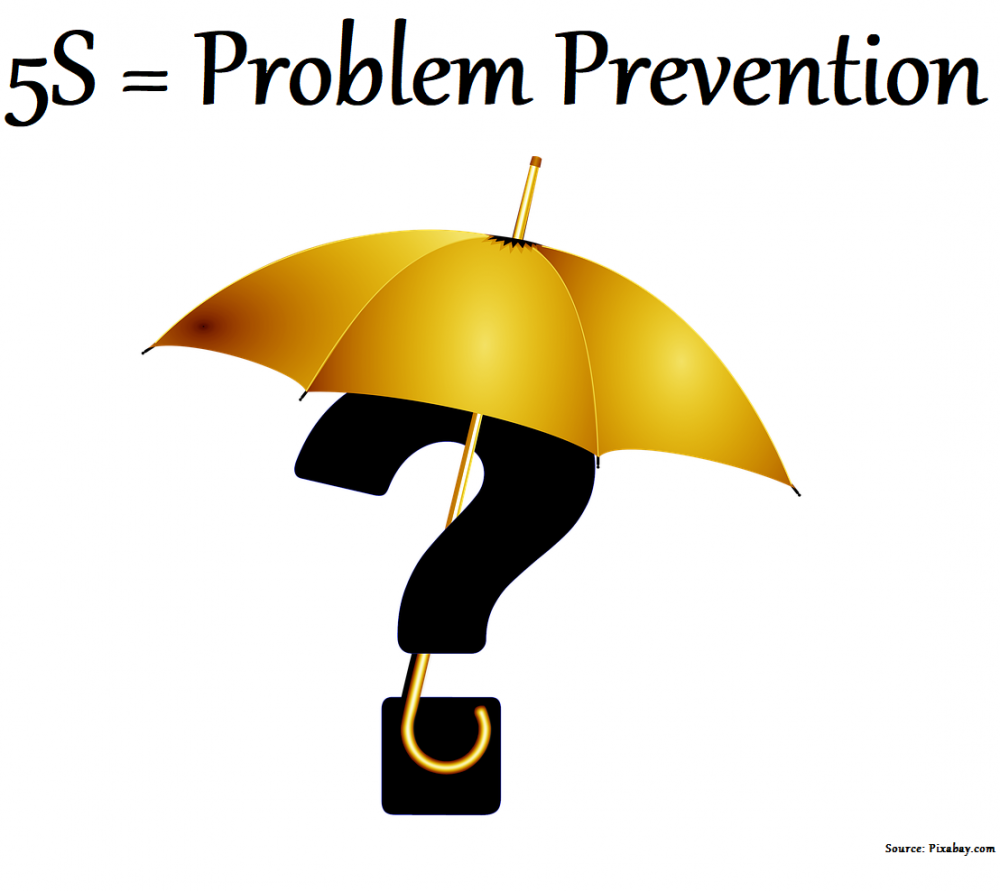 5S is a Problem Prevention Tool

Workplace Management or 5S, as it is known widely, is an initiative that was grossly misunderstood by most of the practitioners. More than the practitioners, it is the facilittors who are supposed to be blamed as they have taught the concepts wrong or misguided the practitioners. There are few myths regarding the application of 5S as Workplace Management System. It is also considered as a “start-stop” event. When you advise someone of practicing 5S, they say, “Oh! We are aware of it, we have done it several times in the past! We are looking for something more than 5S!”

At the outset, 5S is not a “start-stop” activity that one can do several times. It is a habit, like Kaizen™, being practiced every day, by everybody, everywhere in the organization.

5S is not a house-keeping initiative. To be precise, 5S is a problem identification & problem preventing program. 5S is practiced to habituate identification of abnormalities. Abnormality can be defined as “anything that is not in perfect or best condition!” Abnormalities, when allowed to remain, develop into problems. Hence 5S is practiced to nip the problems in the bud, resolve it when they are small in nature. As we take care of the smaller things, bigger ones will take care of themselves.

Let us consider a situation. As you walk along the Gemba, let us say, in an office environment. We see a paper lying on the floor. The paper is soiled too as a few would have stepped on it. As a good housekeeping initiative, the paper will be removed and moved to the trash can. However, in the practice of 5S, this will not be done. The question of “needed but not here” is not answered. If it is in a shop-floor, it could be a nut or a screw!

Finding a paper or a nut or a screw on the floor is an abnormality. When we identify an abnormality, the same is not ignored but investigated. What is this abnormality? From where has it originated? How long it is present? What if it is left as is? Why this has happened? What should be done to prevent the recurrence? – All these questions need to be raised and answers to all of them should be sought. In short, 5S initiative should lead to the 5W1H process. It should also lead to asking 5 Whys or at times, even more Whys. There is a strong link between 5S, 5W1H & 5Y.

In a good housekeeping habit, what would have happened to the paper found on the floor? It would have landed in the trash can! The paper might have had important information or it would have been a part of an important document. Landing on trash will do harm in such cases. Hence 5S does not mean good housekeeping alone but it promotes the questioning habit which is essential for Lean!

5S is not a step by step methodology. You cannot complete Seiri and then do Seiton for next 3 months. All the pillars of the 5S have to go together. We cannot say, we will do Seiri this quarter and do Seiton for the next quarter. It is not a “start-stop” event that you started and stopped for a quarter. One cannot practice Seiri without doing Seiton. As one asks the question “Is it needed here?” in Seiri, it paves way for Seition, a systematic arrangement to keep things in the assigned location.

In the fifth element, the auditing schedule, the time bound action plan with accountability &  the discipline of asking 5W1H are all symptoms of standardization.

Lean programs often start with 5S because it builds, and demonstrates, a culture of self-discipline.  The fifth pillar, Shitsuke, which means “do-it-by-yourself”, will happen only if each one of us who practice 5S have self-discipline. Self-discipline is required to follow the standards.  This self-discipline forms the basis for further process improvements such as standard work, KANBAN and autonomous maintenance.

Without a good 5S program in place, it is difficult to see the problems in the earlier stage – say abnormal condition, until they had become big problems. A good 5S program displays a facility’s culture & mind-set and allows problem prevention.  Everything has a place, everything is in its place, and ready for use, and when they are not we start asking why.  This is the beginning of a 5S program that forms the foundation of a Lean transformation.

If you wish to read & learn more from our blog, click here to follow our blog by subscribing the same

older
Back to overview
newer

Daily Work Management and its Importance!

Economic Revival – Are we Ready?

What Hospitals can learn from matured Lean Manufacturing?

Improving the Service or Support Processes – The KAIZEN™ Way

by Ajit Bhist and Paresh Chaudhary of Kaizen Institute

KAIZEN™ in Organization and Strategy

by Ajit Bhist and Paresh Chaudhary of Kaizen Institute

Learn about KAIZEN™ in Strategy

Layout redesigning and rebalancing of operations for social distancing

by Vineet Rajak and Satish Bahale of Kaizen Institute

Learn about KAIZEN™ in Crisis Management and its 5 Initiatives

Lean Factory Design: Be Lean from the start

Why Get Certified by Kaizen Institute?

by NARASIMHAN GOPALKRISHNAN-SENIOR CONSULTANT AT Kaizen Institute India and Africa

5S is a Problem Prevention Tool

LEAN LEADERS HAVE TO BE SERVANT LEADERS

CAN WE BUY IMPROVEMENT

Art of choosing a Lean Sensei

Functions of Supervisors in Gemba

A Road-map to Manufacturing Excellence

The 6 Sliding Scales of Priorities in Different Cultures

by Fons Trompenaars and Charles Hampden

Factors That Affect Disruptive Innovation Part I of II

Entropy in the Manufacturing World

Back to Basics: Housekeeping, muda Elimination, and Standardization

The Effectiveness of Automation

Top 14 Reasons for Resistance to Change

What can we learn from Japanese Management? Part III of III

What can we learn from Japanese Management? Part II of III

What can we learn from Japanese Management? Part I of III

The Spirit of Mottainai in Lean

The 31-years Journey of Kaizen Institute

The Role of GEMBA in Overall Cost Reduction

Cost Reduction in GEMBA (Part I of II)

Operational Excellence: An answer to curb the effect of recession

The Structure of KAIZEN™ in Logistics and Supply chains

by Euclides A. Coimbra

What is MUDA? Part II of II

What is MUDA? Part I of II

The Learning Organization - Part I of II

5 Pillars of Manufacturing or Business Excellence

Culture Change Starts at the TOP

Improvement opportunities that are hard for managers to see

2 key organization features must for Lean

A Japanese technique for overcoming laziness

by A Japanese technique for overcoming laziness

The fallacy of programmatic change

The Rashomon Effect at the Gemba

Don’t Be an Expert at the Gemba

Qualities of a Lean Leader:

Innovation and KAIZEN™ are not Oil & Water

Why KAIZEN™ in Healthcare?

5 principles of Lean methodology at work: Lean Thinking - Part I of II

Why some improve more & some companies less?

The Missing Link in Lean: The management system - Part I of II

Is your manufacturing operation globally competitive?

Visual management is critical to KAIZEN™

by Creating A Lean Culture book by David Mann

4 level system to create a culture of continuous improvemen

KAIZEN™ mindset: Must - before you embark on improvement journey

Kaizen: What the father of "Kaizen" has to say about it? - Part I of II

Get good ideas from everywhere

"Zero Defect Zero Effect" from a vision to actions!

The rise of Lean Production

The 4 Ws of Performance Measurement

Benefits of Lean in Healthcare

Zero Defect Zero Effect: Is it a myth or a reality?

Do you know the structured way to make improvements?

KAIZEN™ not only means SUGGESSTION SCHEME

Kaizen, Never Too Much

10 KAIZEN™ rules to grow your business

What is the difference between Kaizen, Lean & Six Sigma?

For Suppliers: Benefit or Burden?

For Employees: Stimulating or Stressful?

See CHANGE as an opportunity

Do you really need an external KAIZEN™ consultant?

What is Lean Manufacturing or Lean Thinking?

What is Gemba Kaizen?

The 7 Wastes of Production

Why KAIZEN™ is a critical priority for organizations today?

DMAIC or DMADV: Which one to use?

The 8 Deadly Wastes That Could Cost Your Company

4 stages of group development: Which stage are you at?

Training & Development: Often neglected by many

Applying Lean Thinking in the WAREHOUSE

SDCA before you do PDCA

Team Work is at the heart of KAIZEN™

ELEPHANT AND THE BLIND MEN

Lean Manufacturing: Its now or never!

Argumentative & too emotional – are Indians tough to work with?

3K : The Secret of Standardization

If you want to improve, shut up and go to GEMBA!

The 30-year Journey of Kaizen Institute

How to improve operations in 2015?Part II of II

How to improve operations in 2015?Part I of II

KANBAN: An approach to an evolutionary process

KAIZEN™ Principles: Foundation on which the transformation takes place

Managing Change, One Day at a Time: To change culture Change habits

Why Reading Should be Embedded in a Country’s Culture

Kaizen®: Current perceptions in the industry

Training – Is it an Investment or Expense?

Training Within Industry: The Missing link of Lean – Part III

Training within Industry: The missing link of Lean – Part II

Training within Industry: The missing link of lean

Top 10 Mistakes in Behavior Change…..and some way you can fix them

Lean warehousing – From complexity to simplicity

16 types of loss in Gemba

Realizing the potential of VISUAL MANAGEMENT in Healthcare industry

Why Don’t the CFOs Support Kaizen®?

The Waste in Accounting System

Cellular Layout: The Route to Competitiveness in Manufacturing

A Day in The Life of KAIZEN™ Supervisor

The Salt Vendor and His Donkey.

KAIZEN™ Story: The Crow and the Peacock

KAIZEN™ Story: The boy who learned to swim

KAIZEN™ Story: The obstacle in our path

KAIZEN™ Story: How can we change a system that’s so rigid and entrenched?

Learn to attack the 8th Muda!

Defining a process with SIPOC

A-3: Managing to Learn

Creativity and Innovation through Employee involvement

KAIZEN™ Teian: The bottom up approach for productivity improvement

Key habits to make your business a big success

You don’t win if you don’t begin

Benefits of implementing KAIZEN™ in Healthcare

The foundation of the house of gemba – Part 3

The foundation of the house of gemba – Part 2

The foundation of the house of gemba Part 1

KAIZEN™ Story: Tiger in the toilet

The 14 principles of the Toyota Way

Quality is not an act, it is a habit

Get the most from your assessments

Leaders Need to Remove Barriers, Not Create Them

Do more with less

KAIZEN: A major driver of Change

What does KAIZEN™ mean to you and your business?

KAIZEN™ in a time of Crisis

Paradigm Shift: How can we change a system or mindset?

The evolution towards JIDOKA

The obstacle in our path

KAIZEN™ Story: No prior mindset

From Masaaki Imai to Mike Rother

Its all about Execution!

Extreme Kaizen: Save fuel, Save cost

Fat to LEAN: The Journey of Waste Elimination

What is Leadership Standard Work?

Making The Shift To A Lean Enterprise

If Your Company Does Product Cost Reductions, It’s Already Too Late

What do you see?

What’s hiding under our waters?

KAIZEN™ for Environment – An Introduction

What is Early Management?

KAIZEN® Improves All Aspects of Work

What does “KAIZEN” mean?

Heard on the Gemba: We are great Problem Solvers, But…….

Why Indians Lag Behind?

Quote Of The Day – KAIZEN™

Its all about IMPROVEMENT

KAIZEN™ at State Government of Gujarat

Excellence is not an act but habit

What is Six Sigma?

How Operational Excellence saved LMW during recession while competitors burned?

Get all the latest news about Kaizen Institute India.
Subscribe now.

Thank you for your interest in Kaizen Institute’s services. Please provide the following information about your business needs to help us serve you better.